The VCEHL facility based in Motherwell, Scotland was established in 1950. Here the team of experts design, develop, manufacture and fully support two ranges of haulers: Terex Trucks articulated haulers and Volvo rigid haulers.

The igm robot system has been purchased for the welding of the Volvo R100 rigid hauler body with frame along with the Terex Trucks articulated TA300 and TA400 bodies. The R100 hauler model has a loading capacity up to 55 m³ and a maximum of 90.7 tons payload. So, the operating weight differs from 67.5 to 158.2 tons.

The system was delivered to site in August 2020.

The system consists of two K6 RT 496-S robots mounted on two RSH columns with DM rotating axis, which in turn are mounted on two 30,000mm RTS tracks. The system is equipped with TPS600i TWIN power sources and iCAM 100’s.

The manipulation is coming from two RPH 10000 headstocks and two RFBH 10000 tailstocks mounted on 5,000 mm displacement tracks, giving a maximum face plate distance of 10,500 mm and a height stroke of 1,500 mm.

Connected to the two robots are two Kemper filter 3450 units extracting from one end and the centre with overhead fume extraction canopies. 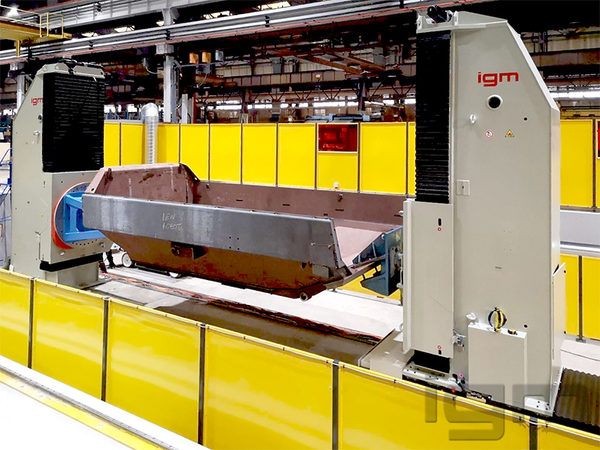