Up to 5 robots work synchronously on a workpiece.

With the new robot control extension MUCK6 (Multi Control for K6) up to 5 robots can work simultaneously and synchronously on a workpiece. The programming of all robots and the manipulator axes takes place via just one igm programming console K6, up to now this was possible for up to 2 robots.

The possible applications do not only comprise exclusively welding tasks, also handling robots can be integrated to the application task. Workpiece manipulators with several external axes are also integrated.

An igm multi robot installation can consist of 5 individual stations, the corresponding configuration is defined in the parameter file of the software, a maximum of 8 different configurations from the interaction of the 5 robots can be specified. The respective selection of the configuration is transferred from the PLC to the robot controller.

Example 1 - synchronised work in one station

Suitable for large components with a large number of identical seams, up to 5 robots can weld the component at the same time (often used in the field of railway production as well as truck production)

For component 1, 5 robots work together in one station, component 2 requires fewer welds and can therefore be welded with robots 1-3, robots 4 and 5 would thus be available to weld a further 3rd component in the 2nd station.

A handling robot receives a welding task in addition to its handling tasks and can switch between the gripper package and the torch of the welding equipment and integrates itself into the network of 2 robots.

Pick & place applications with a tacking system: 2 station operation with 2 welding robots in each station, 1 handling robot alternately equips the clamping fixtures of the two stations, thus alternately linking the 2 welding stations with the handling robot (work cycle #1 = robot 1+2+5 vs. robot 3+4 / work cycle #2 = robot 1+2 vs. 3+4+5). After completion of the handling tasks, robot 5 is released from the configuration and robots 1-4 can process further welding tasks. 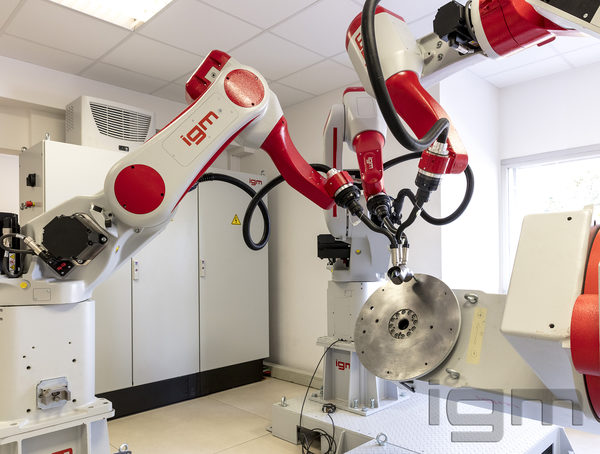