Since November 2020, the demonstration hall at the igm headquarters has been adorned with a new demonstration system, painted in the new bold standard colours. As with the previous system, the basic configuration is a TLA3 system with a longitudinal-, cross-, and vertical slide. The workpiece periphery with an L-manipulator combined with a tailstock on a motorized floor track is also very similar to the previous robot system. However, from a technical point of view, the new system plays all the pieces and is equipped with all current developments that igm has to offer.

The most eye-catching component is clearly the massive handling robot RTE H290, which is suitable for manipulating workpieces weighing up to 290 kg. There is now the possibility to present our extended competence of combining handling and welding tasks by including it in our customer demonstrations. With the automatically exchangeable two-finger and magnetic grippers, the handling robot offers a wide range of possible applications for the assembly of various subassemblies.

Another innovation in the workpiece periphery area is the walkable version of the manipulator floor track, on which a standard tailstock is mounted. In addition to the walk-on feature, the redesign results in a significant space saving in the length of the track, as the previous bellows at the rear and the telescopic cover plates at the front are no longer required.

For certain applications, for example due to a lack of space for extremely complex workpieces, where maximum room for movement of the robot is required, it has proven useful to mount the torch cleaning set externally on any columns rather than above the 1st robot axis as it is traditionally the case. For this reason, in our new demonstration system, the torch cleaning set was mounted on a column of the TLA3 beam. Another special feature of this cleaning unit is the possibility of contactless magnetic cleaning of the welding torch. The usual mechanical method as well as spraying the torch with release agent can also be carried out separately or in combination with the magnetic method. The design of this cleaning unit also offers the mounting of further control units, such as a unit for measuring the gas flow as well as the laser TCP correction system. 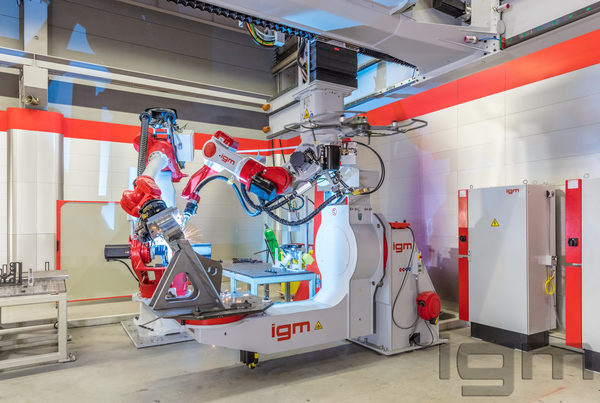