As an important component of the bogie of rail vehicles, the production process of side and cross members is complex and process control is strict. The bogie not only is a key component of vehicle bearing and transmission, but also an important guarantee for the safe operation of the vehicle. Most structures are welded from steel plates, which requires a lot of grinding to deal with residual stresses after welding and places high demands on the accuracy of the components.

Manual grinding requires high intensity, represents a high degree of difficulty and takes place in a harsh working environment. The igm automatic grinding system can effectively solve this problem and represents an extension of the welding area in the production process.

Several grinding robot cells have already been installed in rail vehicle production. Typically, they consist of a handling robot of the 370kg payload class equipped with two changeable, force-controlled belt grinders with different radii. In addition, a tactile sensor for measuring the workpiece position and surface is available via the tool changing system.

The components (longitudinal and cross beams of railway bogies) are picked up by a single-axis manipulator with a 2t station load and rotated into the optimum machining position in each case.

Due to the massive accumulation of sanding dust, the robot arms are packed in a fireproof protective cover the entire system is built up of a closed cell. This cell is part of a flexible manufacturing system (FMS), therefore loading and unloading is done by a rail guided vehicle (RGV) via a high-speed door. 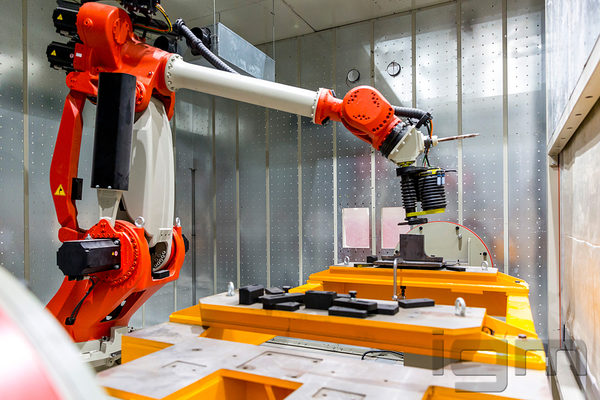